Three men suspected of running an east London sex ring which preyed on girls in care were today jailed for a total of 24 years for raping a teenager.

Naeem Ahmed, 24, Nabeel Ahmed, 25, and Hassan Raza, 23, took turns to abuse the 18-year-old after plying her with drink and drugs.

Naeem, the ringleader and self-styled ‘pimp’, was arrested after police investigated concerns about suspected abuse of two girls under the care of Essex County Council. 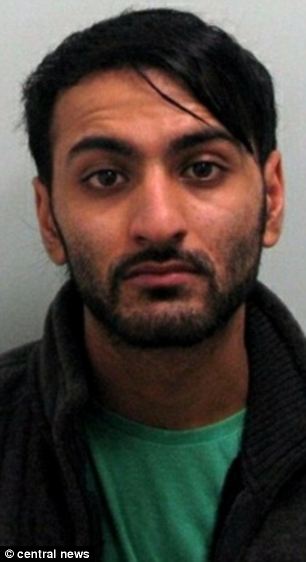 Convicted: Naeem Ahmed, who had bragged to police of his ‘Kama Sutra’ sexual activities with the victim, was jailed for 14 years for two counts of rape
When questioned by police about what he had done with one alleged victim, he bragged: ‘Have you seen the Karma Sutra?’

Naeem was jailed for 14 years, Ahmed was given eight years and Raza was locked up for two years.

In total six girls gave evidence about their involvement with the gang during a seven week trial at Snaresbrook Crown Court.

One girl, aged 17, claimed she was held down and raped by two of the men after she agreed to work as a prostitute for Naeem Ahmed.

Naeem was said to have told her his ‘love for her would grow’ if she slept with other men for cash.

She also claimed she was raped by Nabeel Ahmed and his brother Jameel after being taken to a hotel in Cranbrook Road, Ilford, on January 21.

A 16-year-old claimed Naeem Ahmed told her to have sex with him because he needed ‘to see how good you are in bed’ before asking her to work as a prostitute.

The third teenager, aged 18, was picked up in the street after the men saw her have an argument with her boyfriend and taken to a house in Chadwell Heath.

She was first raped by Naeem Ahmed, also known as ‘Ricky’, before Nabeel Ahmed entered the room shortly after to force himself on her. Naeem Ahmed then went back in and told her ‘I’m not done with you yet’ and raped her for a second time.

‘I just wanted to get away from everybody there, but I just felt like I couldn’t do anything about the matter and I was just panicking and waiting for it to be over.’ 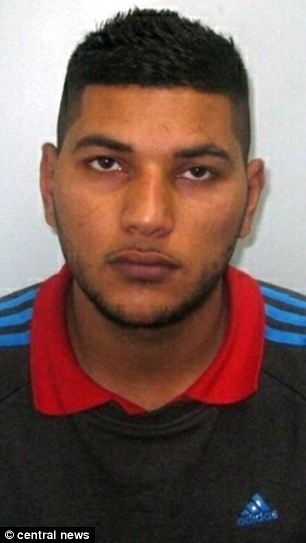 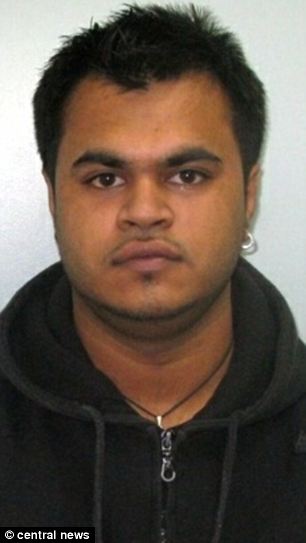 Off to prison: Nabeel Ahmed, left, 25, was convicted on one count of rape, and Hassan Raza, right, 23, found guilty of sexual assault after they took turns to abuse the 18-year-old after plying her with drink and drugs

Another two girls, aged 16 and 17, alleged they were raped and sexually abused by restaurant owner Anas Iqbal, 26, after he met them on the street.

A sixth girl, aged 18, claimed she was persuaded to work as a prostitute by Naeem Ahmed and slept with a man for £30.

The jury did not accept the accounts of five of the girls and after deliberating for five days only convicted the three men in relation to sex attacks on one of them.

Lloyd-Eley QC, defending Naeem Ahmed, said: ‘It cannot be a fact that the complainant believed she was unable to leave.

‘That was nurtured in her own mind, not by anything that the defendants have said or done.

‘As for the element of abduction, it is entirely voluntary throughout from the victim.

Anas Iqbal at Snaresbrook Crown Court: The restaurant owner was cleared of five charges but faces a retrial over two further allegations

‘There is no attempt to conceal anything about themselves; their names, their occupations, their numberplates or their address.

‘Naeem Ahmed is a completely different man to the man that was in the room that night.

‘He has not been able to see his son and that has been causing him a lot of stress and anxiety.’

Leonard Smith QC, defending Nabeel Ahmed, said: ‘The good part of Nabeel Ahmed is that the very day he came to this country he has worked and worked hard.

‘His family have been dependent on him right up until he came into custody.

‘This is a tragedy for his wife and his child.

‘In a way he is a credit to his family but on the night in question it must be said that he falls to be sentenced for a serious offence.

‘The usual rapist does not usually allow their target to ring their mother and buy some food.

‘This is the case with Mr Ahmed.’

Dominic D’Souza, defending Hassan Raza, said he was described as a ‘completely decent person’ by the victim.

‘She does not absolve him but she effectively said he tried it on and when she said to stop, he did,’ said Mr D’Souza.

‘If there was any comfort to the victim then it came during the two to three hours spent with Mr Raza.

‘He has also been in custody nearly nine months which is the equivalent of serving an 18-month sentence.’

Judge Martyn Zeidman told the three men: ‘Each one of you have exploited this thoroughly honest teenager, who was a superbly honest witness and you all treated her in a despicable and cruel manner.’

Nabeel Ahmed, of Romford, Essex, had denied three counts of rape but was convicted of one.

Hassan Raza, also Barking, had denied a single count of sexual assault of the third girl but was found guilty.

Anas Iqbal, of East Ham, east London, denied five counts of rape against one alleged victim, one of attempted rape against another and paying for the sexual services of a child.

He was found not guilty of five of the seven charges and now faces retrial in respect of one count of rape and one of attempted rape.
Read more: http://www.dailymail.co.uk/news/article-2419036/Naeem-Ahmed-Nabeel-Ahmed-Hassan-Raza-jailed-rape.html#ixzz2ez8oBvKb